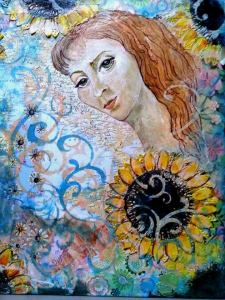 Art has the powerful capacity to tap the brain’s parietal lobe and draw out creative expression, which remains even when speech and function is considerably diminished. Building on more than 30 years of working with adults with cognitive disabilities, Thoma will document her teaching techniques to share with others.

Pendleton3: Simultaneous Soup is a collective multi city and state Pop Up gallery project involving three artist brothers with the first location set to run September 5-26, 2014 in Denver, CO. With the emergence and popularity of the POP UP shops it has now become the model for our gallery/show. This group is committed to utilizing empty storefronts or unused spaces in urban settings. Their desire is to expand this methodology to other cities either organically, or through partnerships. Simulcast feeds will take place between ours and other POP UPs between OKC, Denver and Chicago giving the galleries and participating artists greater exposure.

The artists of The Garden Project (Adrienne Wright and Lisa McIlroy) seek to create a constructed landscape meant for public interaction. The artists describe in their proposal: The purpose of The Garden Project is…to create a space that the public can experience and enjoy [and] to help raise awareness of the positive impact that a beautiful, functional space can have on a community.
http://thegardenproject2014.tumblr.com

Multimedia visual artist Sarah Hearn explores the idea of “Symbiotic Cooperation” literally and figuratively, working with the public to collect over 200 separate specimens of lichen. These lichen have been identified, drawn, photographed, and assembled into collections with the help of lichenologist Dr. Sheila Strawn. Hearn is fascinated with the process of symbiosis that allows lichen to grow and thrive. She plans to use FEAST funding to pursue this project further and create a field guide to Oklahoma lichen.
www.instituteofaquaticresearch.com

Designing Beyond the Cure is a collection of couture garments for breast cancer survivors that seek to change the measurements of femininity from retail sizes to an individuals body shape.
www.mariachaverri.com

Reality and the New Era

Reality will record a new inspirational hip hop album to be incorporated into a History of Hip Hop/Lyrical Development workshop for youth outreach programs in Oklahoma City.
www.realitythenewera.com

Project:
The Red Dirt Wayward Poets are a group of writers and performers who believe in the importance of expressing themselves through poetry and spoken word. The Slam Team will compete in the 2012 National Poetry Slam in Charlotte, NC to represent Oklahoma City on a national stage. Click to watch performances from Slam Team members Rob Sturma, Melissa May, Tapestry, and Grae Rose.

At age 42, I sometimes find myself daydreaming about what kind of mother I would have been. What items would I have made for sons or daughters? How would I have documented their childhood? What would I have handed down to a daughter? What kind of art would my son have made in grade school? For An Imagined Motherhood, I’d like to exhibit a series of paper quilts, audio recordings of conversations with children, photo albums of alternative universe experiences, fictious home movies, and more, presenting objects and stories that might exist had I become a mother.
http://www.romyowens.com